Over this past year, my eight-year-old (now nine-year-old!) became increasingly interested in robotics. The first robot he learned about was Jibo because my husband was watching videos about this little gadget that might someday be a standard household item. My husband learned about it through all the tech sites and podcasts he listens to, and he showed it to us because he thought it was cool.

Well, my son had never seen a robot before and suddenly he wanted to know more.

We began to watch YouTube videos about all kinds of robots that have been invented and also those that are still being developed. I found it fascinating too. (Did you know there is a hotel in Japan being run entirely by robots?)

My son was already an avid Lego fan. He has sat for six hours at a stretch putting together what looks like to me a complicated and tedious Lego kit. He has been building toys and other cardboard creations for a very long time, and he does indeed seem to have an “engineer’s mind.” (So unlike his mom and dad!) We wanted to support our son’s interest in robotics, so my husband did some research about robotics kits, and we learned about the Mindstorm EV3 kit and some others. But it was expensive, and we weren’t sure just how interested our son was in robotics yet.

Technically, this was my son’s first robot.

To help gauge our son’s interest, we took him to the 2014 Maker Faire in Decatur, GA last October. We knew he’d get to see some robots up close and maybe play with them too. Indeed, there were lots of robots at the fair, and my son was able to try some out. He had a blast. 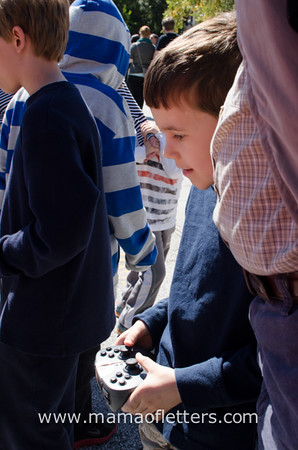 While we were at the fair, my husband and I took the opportunity to ask some Georgia Tech students what they recommended for young kids interested in robotics. They mentioned the Lego robotics kits and one other one. Since our son was already familiar with Legos, the Mindstorm kit became a good choice for us. Indeed, many of the robots at the fair were made with Legos!

We also learned about hacker spaces and maker groups while we were at the fair and that there are a couple of these places located near us. This is not something we have tried out yet, but it may be another possibility to try someday.

It was around this time that we discovered the series Making Stuff by Nova and hosted by David Pogue. There are four episodes, and we all enjoyed them, but they enamored my eight-year-old, and he has watched them all multiple times. The episode Making Stuff Wilder is his favorite because it’s about bioengineering. I can see where my son’s love of nature and animals crosses with his love of robotics in this field. The first time we watched it, while they were explaining some robot inspired by nature, my son leaned forward in his seat, pointed at the T.V. and said loudly, “I WANT TO DO THAT!”

Ever since, he has said he wants to be an engineer. He also said once that he doesn’t think he wants to be just an engineer. We have let him know that many bio-engineers spend most of their day inside a building with no windows. It’s something to consider. But engineering is a huge field with many possibilities, and as he develops this and other skills, such as pottery and piano, you never know where his interests will intersect or compliment each other. So we feel it’s our duty to support this interest in whatever way we can for however long it lasts.

We wanted to get him the Mindstorm EV3 for Christmas, but since it was an expensive gift, we asked my in-laws and mother, if they might want to contribute instead of giving him a toy. They did. (Thank you!!!) I think it was certainly a gift that will have a longer shelf life than anything else we could have given him. He has been extremely responsible with the robot, taking care to keep the pieces separate from his other Lego kits, and he was also okay with receiving very little else that holiday.

Though I was worried he might lose interest in it over time, he hasn’t. Over the course of the year, he has built every robot whose instructions came with the software, and he has built a few others developed by Lego fans. He has watched YouTube videos to learn about the programming, and he has experimented with making his own programming for the robots. It’s not something he works on everyday or even every week, but he always goes back to it, and we’ve amassed quite a nice collection of photographs of his work. 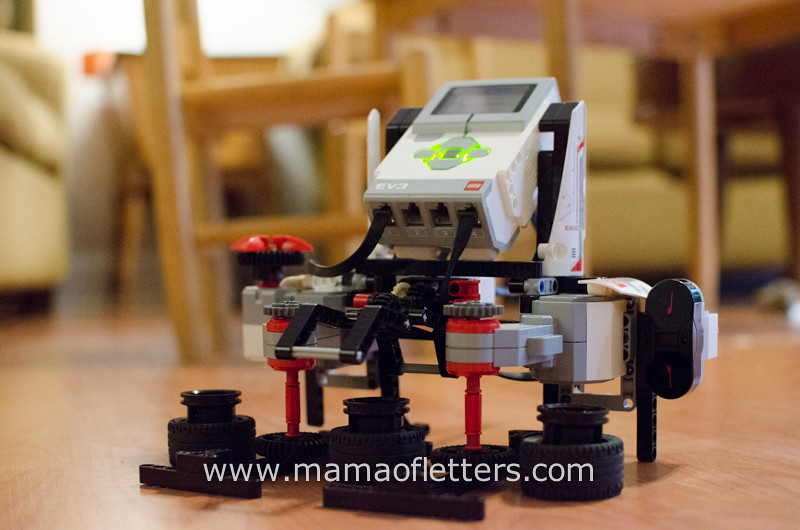 My son’s latest robot plays a “Which tire is the ball under?” game with you.

It got to a point when I felt he needed more instruction, and we weren’t finding easy tutorials online anymore. I wanted to get him into a robotics class. Well, I searched in vain for weeks, and I couldn’t find anything closer than Atlanta, which is a bit too far for us to travel for a class. Finally one day my husband sat with me one afternoon and we did all kinds of Google searches. That’s when we found Engineering for Kids of Northeast Georgia. At that time, they didn’t have a robotics class, but we decided their STEM Club would be a good a match for our son, and later I was happy to find out they were doing a robotics summer camp (close to us!). So my son recently attended that, and he was happy to have one of his friends in the camp with him too.

So this is where we are so far with his love of robotics. He just turned nine-years-old, and his interest is still strong and doesn’t seem to be going away. We’ll continue to support it any way we can, and I’ll be sure to let you know how it’s going too.

It’s no secret that the United States has been pushing more STEM (Science, Technology, Engineering and Mathematics) in education. Though I’m not sure I agree with all the motives for that, and I certainly don’t want to see cuts in the arts due to it, I’m glad there are more opportunities for kids to learn and explore these areas. Many kids thrive with hands-on learning, so there should be more of that.

My eight-year-old is one of those kids who seems to be on a track for a STEM career. Sure, he could change, but when I was his age, I was already writing poetry. (He’s so not me. Thank goodness.) He likes to build things, and he loves science. He’s crazy about Legos and Minecraft. He enjoys art and has even written stories, but the passion isn’t there. His preferred craft is pottery, which, of course, has a lot to do with using one’s hands and building too.

We have done everything we can to support his interests despite the fact that my husband and I come from a business and liberal arts background. (It’s been a steep learning curve for us.) Last year I looked in vain for classes within driving distance to support my son’s love of robotics. He’s learned a lot at home, but there’s only so much more we can do here.

For these reasons, I jumped for joy when I found Engineering for Kids of Northeast Georgia, a franchise that is serving Barrow, Dawsonville, Forsyth, Gwinnett, Hall and Jackson counties. Engineering for Kids provides programming for kids ages 4 to 14 that introduces STEM education. They go into the schools, offer after-school programs, homeschool programs, camps, birthday parties, you name it.

This past spring, I enrolled my son in their STEM Club Saturdays that was being held once a month next door to INK Musuem in Gainesville. He had a great time making a CO2 powered dragster, a model of a roller coaster, and a bottle rocket.

Building a scale model of a roller coaster and learning about kinetic and potential energy in the process.

The owner of the franchise, Jeffrey Butler, told me that he was working on securing a facility in Barrow County for his summer camps, and he did. They will be at the Sims Academy of Innovation & Technology this July.

They will have a “Pirate Academy” and “Junior Robotics: Adventure Stories” for ages PreK-2nd grades. At the “Apprentice/Master” Level (3rd-8th grade), they are offering an “Out of This World Space Camp” and a “Robotics: Mission to Mars” camp. They offer discounts, if your child wants to stay for a full day and participate in both camps.

Butler says they plan to offer a year-round Engineering for Kids Club in Winder in the fall. He said they started this last year at the Lanier Technical College Winder-Barrow campus. They will release their 2015/16 schedule of classes in the summer, and they plan to do an Open House/Customer Appreciation event at their Gainesville campus in early August.