As I mentioned in my last post, we had good opportunities to do some birding on our trip to Mississippi, and this is my eight-year-old’s biggest interest.

On our last day of vacation, we made a stop at the Sandhill Crane National Wildlife Refuge, and we were hoping to see these amazing birds at the refuge. They are three to four feet tall and have a wingspan of over seven feet!

I will keep you in suspense for a while as to whether we saw one or not because birds weren’t the only reason we went to the refuge.

I saw on their website that part of the habitat at the refuge – a wet pine savanna – is home to thousands of carnivorous plants. Remember when carnivorous plants were my eldest son’s project? We were seeing pitcher plants along the highways, and that made us excited, but to be able to stop and see them up close, that was amazing.  We still grow them at home, and we see them at botanical gardens, but we’ve never seen them in the wild. I never imagined we’d get to see so many in one place! Look at them: 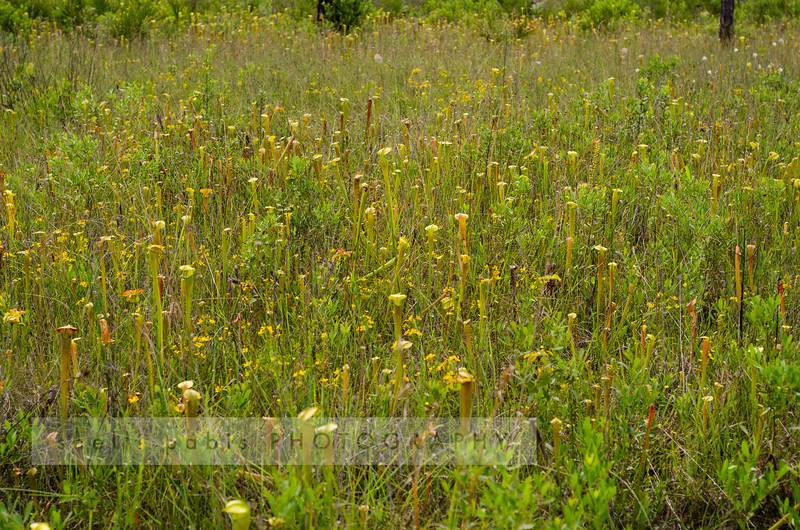 My eldest son and I were taking our time on a short trail, admiring all the carnivorous plants while my husband and eight-year-old went ahead, hoping to find the cranes. We all wanted to see the cranes. But, unfortunately, they weren’t right where we were that day, and according to the people who worked at the visitor’s center, they rarely see them either.

We were determined to see a Sandhill Crane for my eight-year-old’s benefit. (Ahem. My eldest son and I saw two of them along the highway on the way to the refuge, but we were so shocked, we uttered a cry that made my husband think we were witnessing a car crash. And while going 60mph, there was no way to stop or turn around. It was one of those “if you blink you’ll miss it moments,” so we didn’t get a good look at them.)

The people who worked at the refuge drew us a map and told us about some nearby residential areas where the cranes are sometimes seen. One of the streets had a pond on it, and the cranes would stop there occasionally. So after we walked on the trail at the refuge, we took off in the car, hoping to find a crane.

And we found one! Only one. But we saw one. He was in the distance and in the shadows of some trees and bushes, but we were able to stop our car and get a good look at him with our binoculars. It was so exciting, and I think you could say that we’re official birders now — this was our first time searching for a bird! We were happy it was successful.

Do you like birding? Please tell me about your adventures.