In August and September, we had a pretty amazing experience. It started because last spring, I tried planting some milkweed seeds. My plan was to grow a lot of milkweed, and then I would order some monarch larvae and try to raise them just like we did for painted ladies four years ago.

My ideas didn’t quite work out the way I planned. First of all, out of 150 seeds, less than ten milkweed plants grew. (I’m sure this has more to do with my yard’s growing conditions and my lack of a green thumb. I have a green pinky.) They also grew very slowly. Only a few of them got big, but they never blossomed.

One day while I was watering the milkweed, I noticed some holes in the leaves. When I turned over a leaf, there it was — a tiny monarch caterpillar!

When I searched, I found them all over the milkweed. We were so excited. There were almost 20 caterpillars. (Every time we tried to count, we got a different number. There were a lot of hiding places in the milkweed.)

They grew and grew. I wondered from the very beginning, if this little patch of milkweed would be enough for them, especially after they got big.

We had another worry too. Tropical Storm Irma was going to come through here. I noticed that a mere sprinkle of the hose to water the milkweed could knock down the caterpillars. 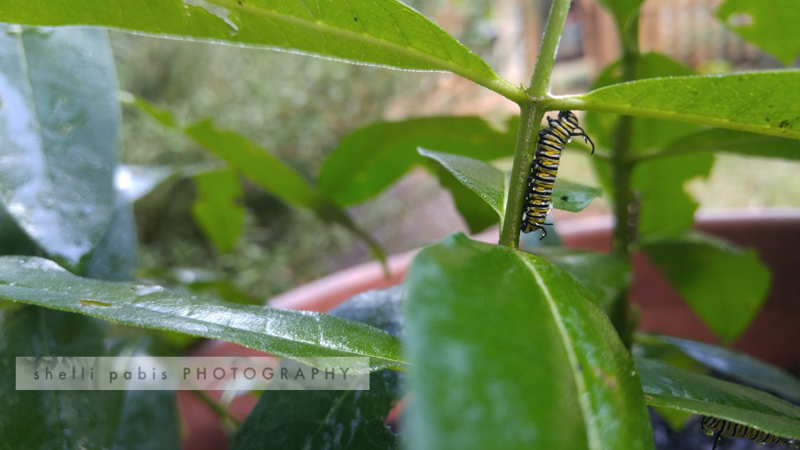 There was no way they were going to survive Tropical Storm Irma. We made the effort to put the big pots into our garage, and as the storm was passing, I was glad I did that. It was fierce. (But I am saddened to think about how much wildlife must have drowned in that storm.)

They continued to eat and eat, grow and grow, and poop and poop. Just like caterpillars are supposed to do. It was quite amazing to watch. 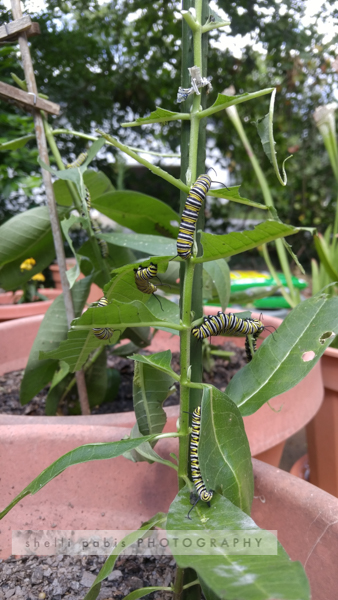 We were clearly going to run out of milkweed, so I asked around for help. Someone on Twitter sent me an article saying that if the caterpillars are in their 5th instar, they will eat pumpkin and cucumber. So we bought some pumpkin and cucumber and put it in the pots, giving them a way to climb up, just like on the milkweed. At first they didn’t eat the alternate food, but by the next day, the milkweed was gone, and they were eating it! We were so relieved.

Not long after this, we noticed some of the caterpillars began leaving the pots. We knew they were probably going out to try to find a place to pupate. We decided to keep a few in our butterfly cage. I wanted the boys to be able to watch the metamorphosis, especially my eight-year-old, who doesn’t remember raising the painted ladies. I also wanted to give a few of the caterpillars some extra protection. I put seven caterpillars in the cage, and let the other ones go on their own. 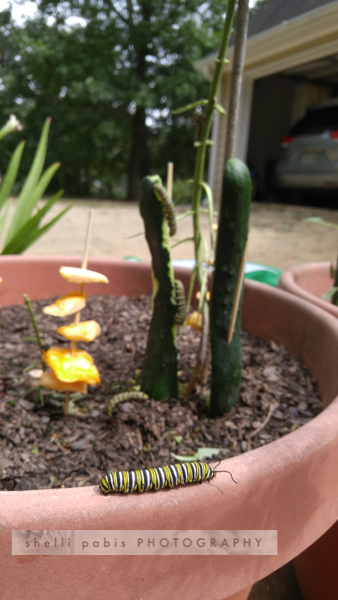 When caterpillars are ready to pupate, they find a good place to attach themselves to with a silky thread and hang upside down in this J shape. They were like this for about one day at least.

Pretty soon we had four chrysalises in our cage. A day or two later, we had three more. So far, so good. We were so excited to be able to watch one become a chrysalis! I hastily grabbed my phone and got these not-the-greatest videos, but still, it’s pretty incredible.

(Something you should know about these videos: You might want to turn your volume down because my neighbor was cutting up a tree that fell during Irma with an electric saw, and it’s quite loud. Also, my son says the caterpillar is not shedding its skin. Actually, it is! It sheds all of it, and it will finally fall off in the second video.)

We also found a caterpillar hanging from one of the pots with the milkweed growing in it, and it made its chrysalis there. We were so happy to know where one of our “free” caterpillars went to. We looked around our yard for more chrysalises, but we couldn’t find any more at this point.

After about nine days, we began to notice that the chrysalises were turning a black color. This is actually because the chrysalis is transparent, and we could now see the monarch butterfly’s wings inside this beautiful pupa. 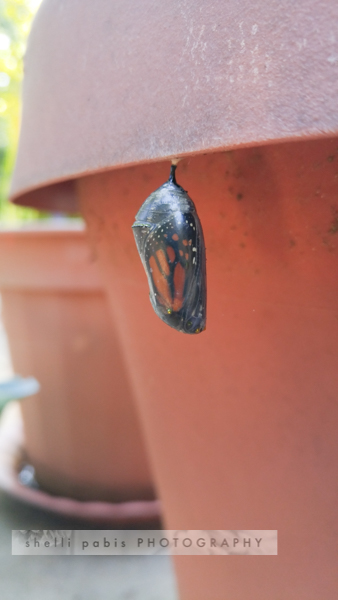 Exactly ten days after pupating, the first butterflies emerged from their chrysalis. I can’t tell you how excited we were.

We ran over to check the chrysalis on our pot. It had emerged too! It stayed there for about an hour, opening and closing its wings slightly, letting them dry. My boys were there when it finally flew away. 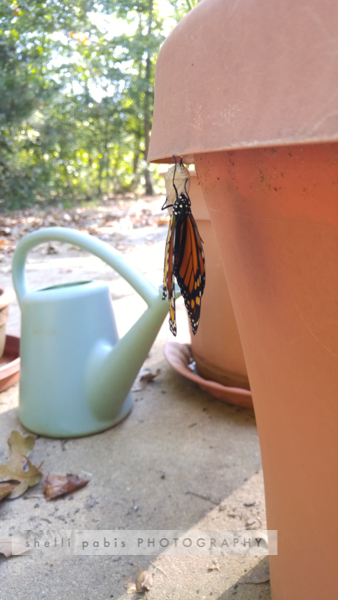 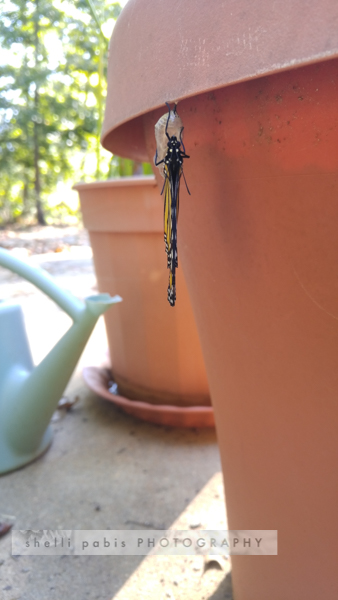 To our delight, we found three other butterflies emerging from their chrysalis in the yard! It’s easier to find the butterfly than the tiny, green chrysalis, but finding one butterfly led us to finding another chrysalis, which was nearby. 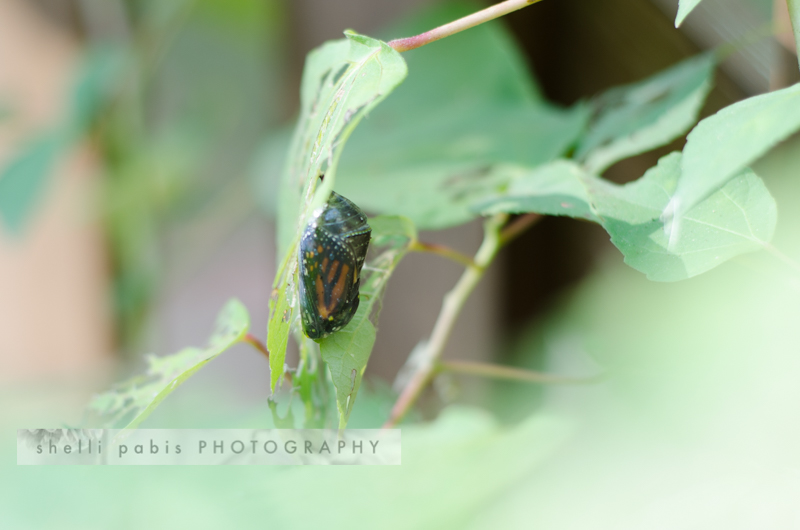 We stayed by this one all morning, and we were able to watch it emerge. It’s not the best video, but here you go:

Throughout the day, four of the seven butterflies in our cage emerged, and we let them go as soon as they seemed strong enough to fly. 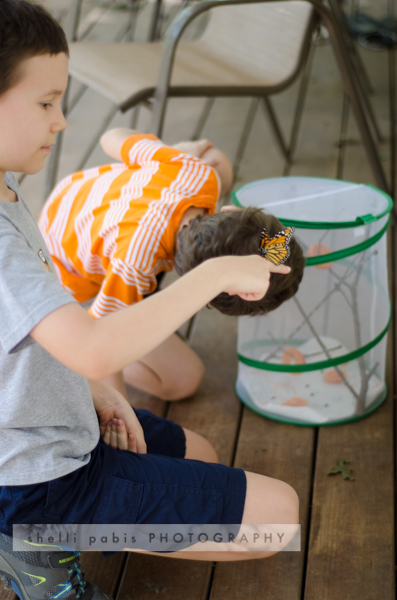 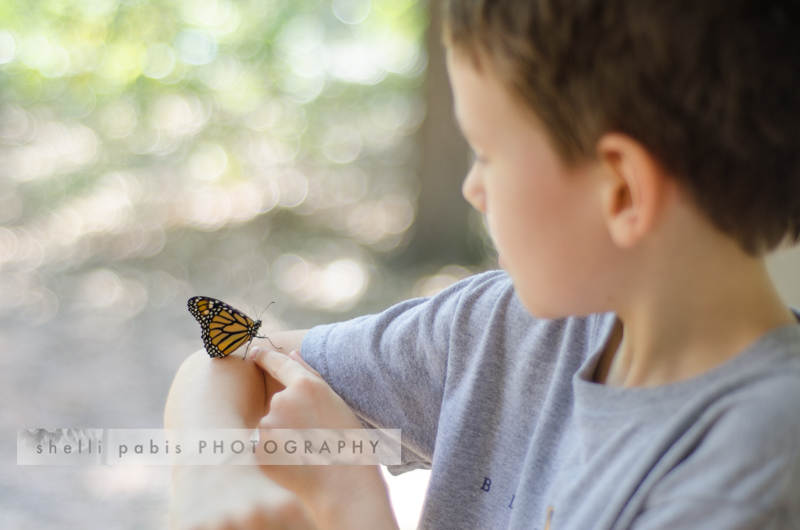 The next morning, the last three butterflies emerged, so we said good-bye to them too.

Now all the butterflies are hopefully on their way to Mexico where they will spend the winter. If you’ve never heard about the Monarch migration, or how they congregate together in one place in Mexico, you should read about it.

I don’t think we’ll ever forget this experience, and it’s times like these that I’m especially glad we’re homeschooling. Most kids don’t get to stop what they’re doing and spend a whole weekday morning watching butterflies emerge from their chrysalises. But what better education is there than having an intimate experience with nature?

The boys are hoping we’ll get to do this again, and I’m hoping it doesn’t happen until we have plenty of milkweed. But our little milkweed plants are recovering and growing faster this time, so I’m hopeful. 🙂

What exciting experiences are you having this autumn?

If you are needing to teach your child at home due to the school closures, feel free to ask me any questions. Don’t try to replicate school or my homeschool! Take some time to relax. You’ll figure it out. Cancel reply