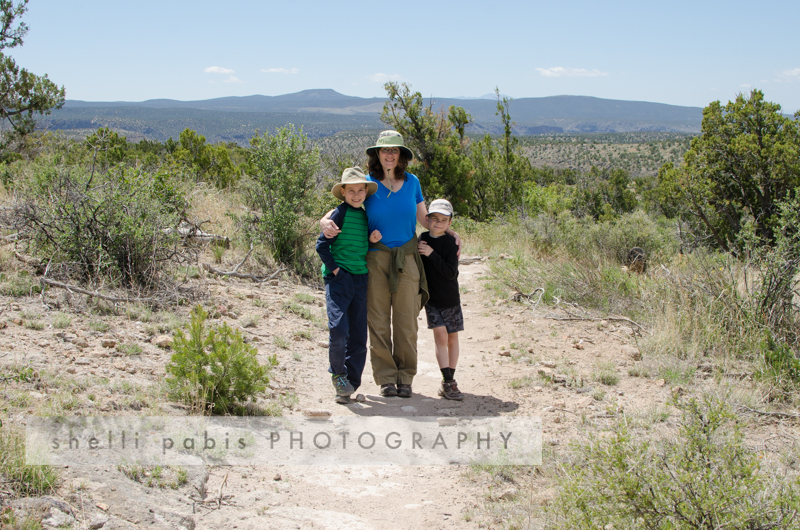 In May, we took a trip out west. We weren’t expecting to undertake such a big trip this year, but we often mused about taking the boys out west. Then, my sister asked us when we were coming for a visit…she and her family live near Denver, Colorado. That was the push we needed to get us on the road.

It was the longest road trip we’ve ever taken, so we weren’t sure how anyone would behave (most of all, the adults!). But we made it almost-painlessly on the two day drive to New Mexico, which was our first destination.

I used to live out west, but seeing it with my children was like seeing it for the first time again. The boys were thrilled to see the desert landscape, pronghorn antelope, a horny toad, and my 10-year-old was even lucky enough to get a glimpse of elk while we were driving! They were familiar with these animals from all the documentaries we watch, and especially Wild Kratts, so seeing them in person was very exciting! We (especially me!) were also thrilled to identify some birds that don’t live in Georgia — grackles, ravens, magpies, etc. It was so much fun!

We spent a couple of days in Santa Fe, which I’d always wanted to spend more time in, and so did my husband. It’s a beautiful, artsy, touristy town with a lot of history. We spent an afternoon looking through the art galleries, and I thought the boys might get bored there, but they enjoyed that! My seven-year-old said he had fun because he “saw many things I liked!” The only place they did get a little bored in was the Georgia O’Keefe Museum, but I enjoyed that.

The second day in Santa Fe, we headed a short distance out of town to see Bandelier National Monument, and this was perhaps our favorite site to see. We took what was at least a 2-mile hike through a beautiful landscape that was quite different from home.  This hike ended at some incredible Pueblo ruins. I had never even seen anything like that before. (We bought some books about the Pueblo Indians at the visitor center, which I’m reading to my boys now!)

After Santa Fe, we drove up to Denver and spent four days at my sister’s house. My grown-up niece and nephews stopped by to see us too, so my boys got to meet their cousins, which was great. There was a big snowstorm in the area when we arrived, which kept us from going farther north. But since we were tired from traveling, it was nice to stay around my sister’s area, enjoy the mountain view from a local park, and go to the pool at her gym.

After our time in Denver, we headed south again, but this time we went to Albuquerque. We were there for just one day, but we packed a lot in. We went to the Indian Cultural Arts Center, Petroglyph National Monument, and Old Town Albuquerque for dinner and a bit of shopping.

This was an incredibly educational trip. The Indian Cultural Arts Center was a fascinating place, and I read most of the exhibits to my boys, which were full of stories and inspiring messages from various Pueblo cultures. The museum is owned and operated by the 19 Pueblo tribes that are located in New Mexico.

I had seen petroglyphs before, but I had never seen as many as I saw at Petroglyph National Monument. The petroglyphs are carved into large basalt boulders, ancient volcanic rock that had once flowed around a hill, but now the hill has eroded away. This is called reverse or inverted topography, and the canyon that is left behind is called Boca Negra Canyon.

This trip created memories that will last a lifetime, and we’re so glad we took the plunge and went.

Do you have any special trip plans for this summer? I would love to hear about them.