By the time my son graduates, I not only want him to be a competent writer, I want him to have read a lot of great literature. I think good literature teaches children much more than language arts. I use it to teach compassion, history, and about different kinds of people and places, just to name a few things.

My 10-year-old has never been drawn to literary things like I was a child, but he used to love for me to tell him stories, and he still enjoys being read to. He also reads comic books by himself. (I consider that a win.) Until this year, he hated the physical act of writing…it hurt his hand. So, I waited, worried, tried different things, didn’t push too hard, and waited some more. At nine-years-old, whatever it was that bothered him about picking up a pencil, went away. (Yay!) So now I’m slowing acclimating him to doing a little more writing during his lessons, and I’m planning to start a more formal writing program next year.

With those things in mind, here’s what we’ve been doing so far this year:

Recently I finished reading The Birchbark House by my favorite author, Louise Erdrich, out loud to both boys. It’s the first book in a series that is supposed to compliment the Little House series as it tells the story of a young Anishinaabeg girl. At first, my younger son wasn’t interested in the book, but he was always in earshot, and half-way through the book he began to sit down and listen with his older brother. The 10-year-old liked it a lot, and I think he’s looking forward to its sequel. You can read a review I wrote of the The Birchbark House on the home/school/life blog, but it’s a great history lesson as well as a beautiful read. And I loved that it had strong, female characters.

This is where I’m going very slow, and I’m just getting him used to putting pencil to paper more often.

Since he’s willing to write now, I dusted off some old workbooks that we used in previous years, and I assign a 2-4 pages per week. He’s finished with Printing Power by Handwriting Without Tears and almost finished with this Star Wars writing book, which has creative writing prompts in it. These are for younger grades, but like I said, I just wanted to get him used to doing some more writing. We’ll be jumping ahead and into a more formal writing program next year, I think.

He is also still working through a free keyboarding program. He hates it, but this is something I think he’ll be thankful to know later. I only require it once or twice a week as well. 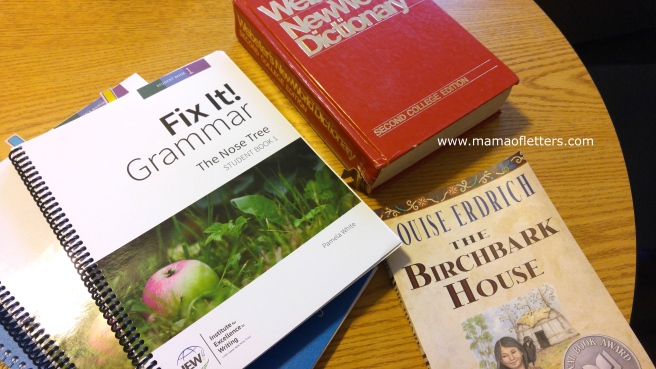 My big project — reviewing grammar curriculums for home/school/life magazine — really paid off for me. (I hope you will read it!) I didn’t think I would be able to find a grammar curriculum that my son would like, but I did. We’re now using Fix It! Grammar by the Institute for Excellence in Writing (IEW). Right now we’re using the first book (there are six total) called The Nose Tree. I plan on buying the next books as we need them. My son has actually said he likes doing grammar with these! Each week I teach him about a new part of speech, and then there are four days of very short lessons. All he has to do is correct one sentence, look up a vocabulary word, and copy the sentence into the notebook. The sentence he’s correcting and copying is one sentence in a long story called The Nose Tree, and once he finishes this book, he’ll have written out the whole story in his notebook. We both love that.

Although the curriculum conveniently creates lessons for a four-day school week, we usually take two weeks to complete them. This is because I don’t do grammar everyday…we have so much to do!

This is what we’re doing for language arts right now. I have many plans percolating in my head about the future of my sons’ language arts homeschool program. As I work through them all, I’ll be sure to share it with you. Thanks for reading. 🙂